The story of the Karyam

Home » The boat » The story of the Karyam 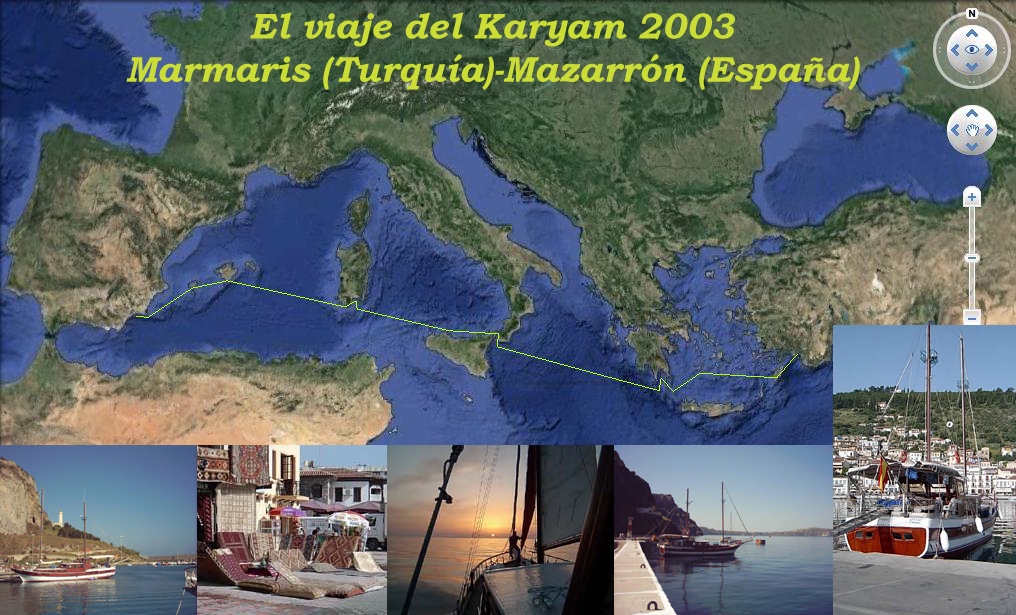 She was built in the Hasan Alan boatyard in Bodrum, Turquey, in 1988 and was originally privately owned. The boat was refurbished for chartering in the south western region of Turkey.

We bought the “Karyam” in February 2003 and, after a lot of red tape with the Turkish authorities, the Spanish Consulate in Istanbul authorised us to hoist the Spanish flag and then the Turkish export department gave us permission to leave the country on a course for Mazarrón, Murcia.

We left the port of Marmaris, Turkey, on 8 May heading for the port of Rhodes, 40 miles to the south. When we got there we took the opportunity to buy more provisions and plan the rest of the voyage, which would take us across the entire south of the Aegean Sea from east to west.

The following day we sailed to the north of the island of Tilos, to the south of Astipalia and, finally, after two days sailing we moored up in the marvellous enclave of Thira, a volcanic island, where we repaired the boat’s rudder and did a spot of tourism. 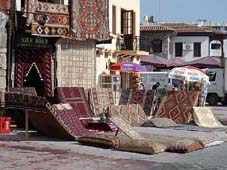 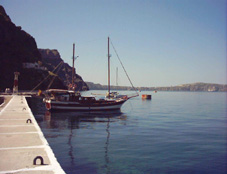 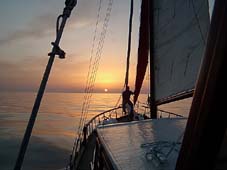 At nightfall we set a course for the south of the Peloponnese to disembark in the charming village of Ythion where we were greeted by a local who spoke Spanish and showed us around. We had fish for dinner beside the sea and drank a fabulous white wine which is made locally.

On 27 May, along the southern coast of the Greek Peloponnese, we headed the bow 278o to the Strait of Messina and, after sailing for 60 hours, we crossed the Ionian Sea amongst tuna, which made a good lunch, dolphins to the bow and a glassy sea.

The Strait of Messina received us with strong winds to the bow which flooded the deck. We moored up in the port of Nettuno and had our first Italian pasta in the town of the same name: Messina.

We carried on sailing along the coast of northern Sicily and moored in the Medieval town of Cefalu and, on the following day, in the industrial city of Palermo to fill up with diesel.

As nightfall we sailed round the Capo Gallo with the sun disappearing behind the Karyam’s bow, heading 288o to cross the Tyrrhenian Sea pointing towards the south of Sardinia. 50 hours later we arrived in the Marina di Capitano, a marina in the bay of Cagliari, in the south of the island. We had two days’ rest at the port and took in supplies before leaving on a course for the Balearic Islands and get to Spain. 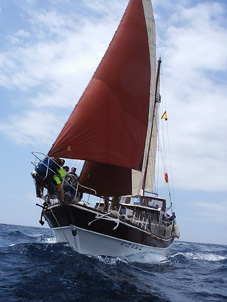 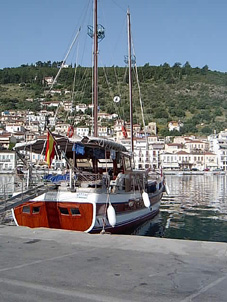 Just 100 miles from the Spanish coast we were taken by surprise by force 7 northerly winds which delayed our arrival at the south of Mallorca, navigating 4 and 5 metre-high waves. The Karyam proved herself to be a truly seaworthy boat and her crew to be expert sailors.

Finally, at 6 pm on 19 May, we moored up and rested for a few days at the port of La Rápita to the west of Cabo Salinas in the south of Mallorca.

The earthquake in Algeria was felt with force in the Balearic Islands and broke the magic and relaxation of our return to Spain.

On 21 May we went to Ibiza to visit the island, on 22 May we crossed the narrow channel separating Ibiza and Formentera and, at last, on 23 May at 6 o’clock in the morning, the Karyam traversed the bay of Mazarrón. We moored up in the Puerto de Mazarrón fishing port and ended our 15 day journey across the Mediterranean.

The Karyam’s crew on the voyage: 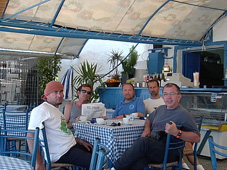 Antonio Olivares (calm at all times), Paco the electrician, José Oliva (Jack-of-all-trades), Armando (who was with me on the entire journey), his friend Jesús (the little chef) and his cousin from Mallorca. Also to Jordi for his logistics support.

To my colleague, Willy, who set some fantastic courses for me around Greece and Italy.

To the staff at the Spanish Consulate in Istanbul.

To my Turkish friends who helped me to have an enjoyable stay and to solve quite a few problems: Mehmet, Mohamed, Iker, Nüket, etc.

To the friends we met along the way (above all in Sardinia). They know who they are.
Thank you to all of you.

A short time ago we had the misfortune to receive the news that our friend and colleague Armando Sánchez had passed away, after fighting a terminal illness. We would like to send a huge hug from here to his family. The only other thing left to say is that we shared small ripples and great waves together, he was always courageous and was much-loved by the rest of the crew. You will always be with us on board.